The Interview with Anne Lonnberg

4. b Katrina dies in the second season. But it's not that clear, because we only see a big fire and William just assumes that she perished in it. I think that this tragedy would have gained in credibility if you had been physically there, playing at least some scenes before.

Did you discuss with the production to appear in a few more episodes?

5. How did you and Will Lyman work together?

5.b In episode 7 ‘Sanctuary’ you both have to do a close scene. What was your experience? Are such scenes in the script actress difficult? Anne: Lyman is not difficult to kiss! Plus, it is a discreet love scene. In other films I refused to do naked or indiscreet scenes.

6.    In episode 7 Santuary, at the convent Lavaudieu, you were very convincing at playing a bereaved and inconsolable woman. How did you manage to impersonate your character so well? Had you played in dramas before? Anne: I’m an actress! And not difficult to play this kind of role. One only has to put oneself  into the situation- as a woman, and as a wife and mother.

7.   In this same episode, Katrina is a little bit disappointing though. Because she prefers to trust the enemy more than her husband, about the supposed death of Matthew. And when William says that their son is still alive, she doesn't believe him. She even shows him an empty tombstone as a proof of his death. A usual reaction would have rather been "I trust you, where is he? let's search for him now!" or something like that. What's your interpretation about the reactions of Katrina?

Anne: I agree. But that’s how the script was written.  I do remember questioning it at the time but the Americans are difficult to sway!

8.    You appeared in four episodes, that's about 3 or 4 weeks of Crossbow. Did you had to wait a lot and stay there all the time? How did that go? Anne: They more or less grouped my scenes so I didn’t have to travel there and back. In all, I was on location about three weeks.

9.    The first season you appear in episode 1 The Banquet, 2 The Prisoner and 7 Sanctuary. The first two episodes you were at the village (Chateau Epierre, Haute Savoie) and in episode seven in Monastery Lavaudieu. Can you remember this environments? What was your impression of the locations? Anne: We were in the most beautiful areas of France. I had the impression we had gone back several hundred years. I was awed, every single day.

1 10. Do you remember if the monastery abandonned? (Nowadays people are living in parts of lavaudieu and you can partly see it with a guided tour) Anne: I think it was empty. Not lived in, and was rented for the shoot.

11. In episode 7 Dantes (Dominique Hulin) ruins the monastery of Lavaudieu. The scene at the end is a swordfightscene. You helped Tell to kill Dantes. Do you have an anekdote about this scene?

Anne: It was fabulous to shoot. I loved being in the action! I did get a few bruises however, as I was not dubbed. It was well worth it!

812. You played together with Elisabeth Caza (mother superior) and your ‚son‘ Mathew (David barry Gray). How was your experience with working together with them? Anne: Elisabeth Caza was in life like she is as a nun. Sweet, calm, warm woman. David: the typical American youth, no real impressions of a deeper character. I really didn’t have much of a relationship with him. And, I thought he was “too American” to have been cast in this role. He lacked depth and emotion for me. Sorry to be so frank!

13. A lot of tense fighting scenes in Lavaudieu (Sanctuary). Did you get fight lessons? Pots throwing through the air and a wild man with an axe hits everything around you..how did you survive this scene? Anne: Funny question. I just did as told. There was no danger. But it was exciting nonetheless, and very real. Yet, don’t forget, these scenes are cut up into mini shots, so each shot only lasts a few seconds. It’s not as if we played them out continually, so one gets to breathe!But it was still invigorating to do a scene like this one. I must say that the big bad guy was impressive, albeit very sweet in real life.

14. A question from Jeen Ruet from the Hans Meyer fansclub:  She acted, I find, in two episodes of CROSSBOW?  They are both episodes Hans (Captain of the guard Tyroll) also participated in. Hopefully she has some memory of him.  My question for her would ask "does she have any memory of working with Hans?".  I am sure Hans' fans would like to read her answer if she does.  Anne: I remember him vaguely. A very nice man. Don’t think I had any scenes with him.

15. Katrina reappears in the third season, and more precisely in the 70th episode named "Forbidden land". This episode is a pretty madness and we don't really understand if it's an hallucination, a nightmare or the reality. At a moment, Katrina screams in a barn, while she is surrounded with Matthew by undead soldiers. After that she rejects William and then she asks him to give up on his ideal. What's the meaning of this episode? Do you have any explanation to give to us?Anne: I didn’t understand it either. I don’t remember asking for an explanation: I don’t think anyone really understood! I believe the screenwriters left it up to individual analysis.

15.b It’s filmed in a different location. Causse de Sauveterre Lozere. How did you experience this special place? Anne: Awesome, wondrous, wild.

16. What are some of your fondest memories of being on the show?

Anne: Just getting into the skin of this woman. As soon as I put on the costumes, while my makeup was being done, slowly, slowly, I found myself being sucked into the magic of this shoot. I had never experienced this special osmosis before, maybe because I was interpreting history? Or legend? Also, and again, the magical places we shot in added to the strange sensation of almost a dream.

17. Do you keep in touch with anyone from Crossbow?

18. How was your experience with the series? Anne: Very professional, but director and producers etc. kind of distant. It lacked warmth for me.

Anne: Days are always long on a film. One has lots of waiting. Scenes were grouped together for each decor. So actors more or less stayed in the same place until the scenes were filmed. I do remember lots of driving however to get to another decor.

19. What is different from filming and acting then and now?

Anne: I don’t really know because I stopped acting a long time ago.

20. How was it to be a Bondgirl? Was Roger Moore your favourite Bond?

Answer: Fun to do! And no, it was Sean Connery.

21. Did Crossbow continue your succes after the populair Bond films?

Anne: As I was already a ‘confirmed’ actress, I just kept on getting normal offers. The fact of being a Bondgirl didn’t particularly help in any way, but the press maybe contributed, who knows?

22. We also know you from James Bond. Can you tell about your experience as a Bontgirl?Anne: to me it was a shoot just like other jobs except we were on that “magical” cloud of being labled a Bondgirl.

23. Do you have an akedote about about Moonraker?

Anne: I took my first son Yann who was 6 years old on the set and Richard Kiel the Jaws character held out his index and asked Yann to grab hold of it. He lifted him up to the sky!

24.    How did you combine being mum with acting? Anne: Difficult. I refused many offers if I had to leave for a length of time. My children were far more important, and this is one of the reasons I stopped acting.

26.    Perhaps an difficult question: But have you every noticed being older as a woman is hard in the filmworld?

Anne: I guess it is but it never bothered me as I stopped acting. Growing old is natural. (obviously) I’m trying to accept aging but when one nears 70, it’s normal to be afraid, not of getting old or dying but of being dependent on others (my children)- I want to be autonomous always. I do take care of myself, eat bio, lots of vegetables and fruit etc, and I MOVE all the time (riding my horse, walking every day, yoga, etc) I feel young and healthy.

28. Would you recomment one of your children grand children to go acting?

29. You are writing thrillers. Where did this begin? How do you get inspiration?

Around 15 years ago I started writing books.

Anne: big question. I wrote screenplays for 10 years with my husband. Started writing thrillers just for myself- no particular source of inspiration, I just love thrillers. Was very lucky to be published immediately. I do use places I know that inspire me, like Montana where my sister lived, California where I was born, this old stone house in Normandy where I live, but the characters are all fictional… (mostly!)

30.    How long does it normally to get a book writed? Anne:  From one to three years

31. I would like to read a book written by you. Can you recommand me one?

Paradoxically they are all only published in French for now. All translated from English. If ever one gets published in the original language I’ll let you know. Me: 'Great! Thank you!'

32. When did your passion for singing and music start? What do you like the most? Do you still play in a band?

I read you played the Banjo, would you liek to tell us about it? My mother was a piano teacher so I grew up with music. I self-learned the guitar as a child. Wrote songs – and was lucky to make records here in France. Now I play banjo in a New Orleans jazz band – The Miscellaneous Jazz Band. We’ve been playing for ten years now.

33. I read you like music and horses. Do you have more hobbies?

Anne: Ever since a child in California. I had my own horse at 12 years old. Here in Normandie I had a French trotter who is now 31! And I ride my mare, also a Trotter, she’s beautiful and black and spirited and wonderful. I hope to ride until the day I die.

35. In episode 70 we see Katrina riding to Tell and offer him an elixer of peace.

Do you remember the scene?

No. I think it must have been done by a double.

We both like horses so we sent each other a photos of our horses. She sends me back:

'Your horse is beautiful!' Below you can see her horses are beautiful too! 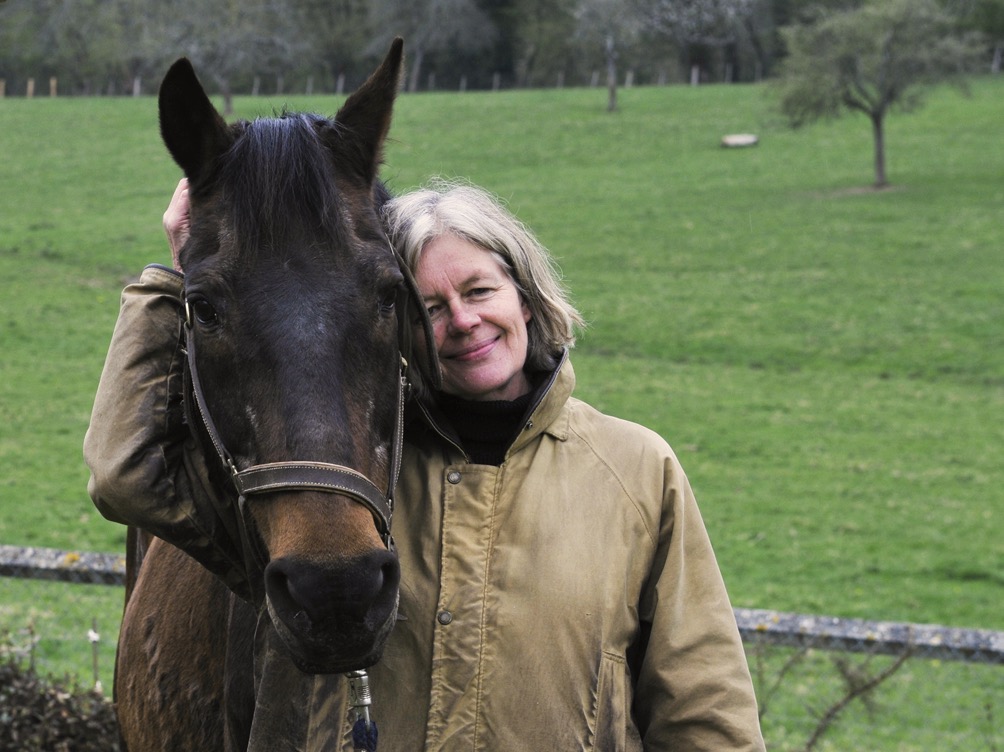 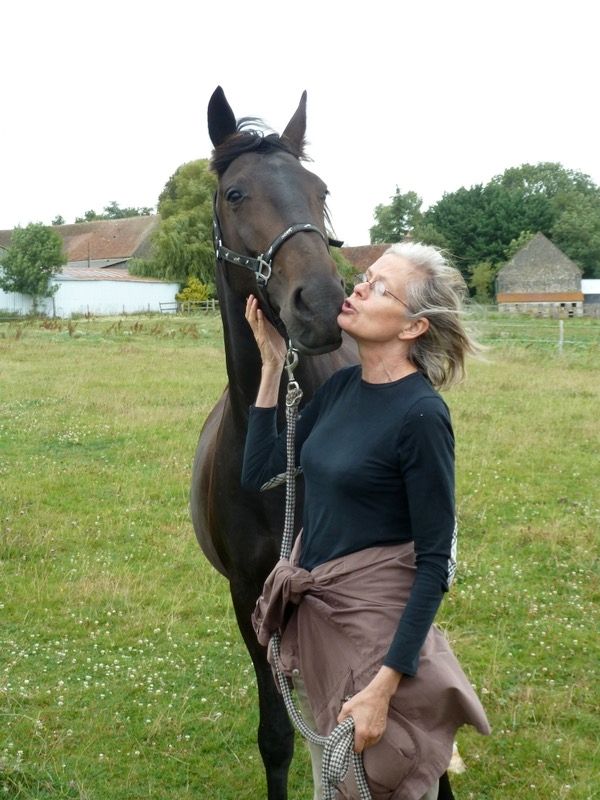 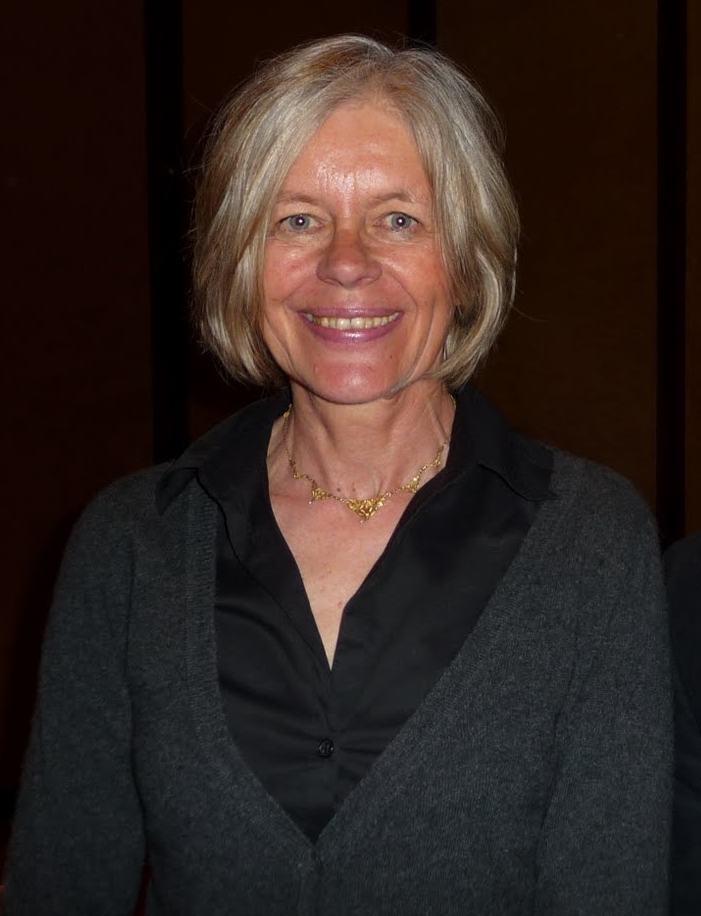 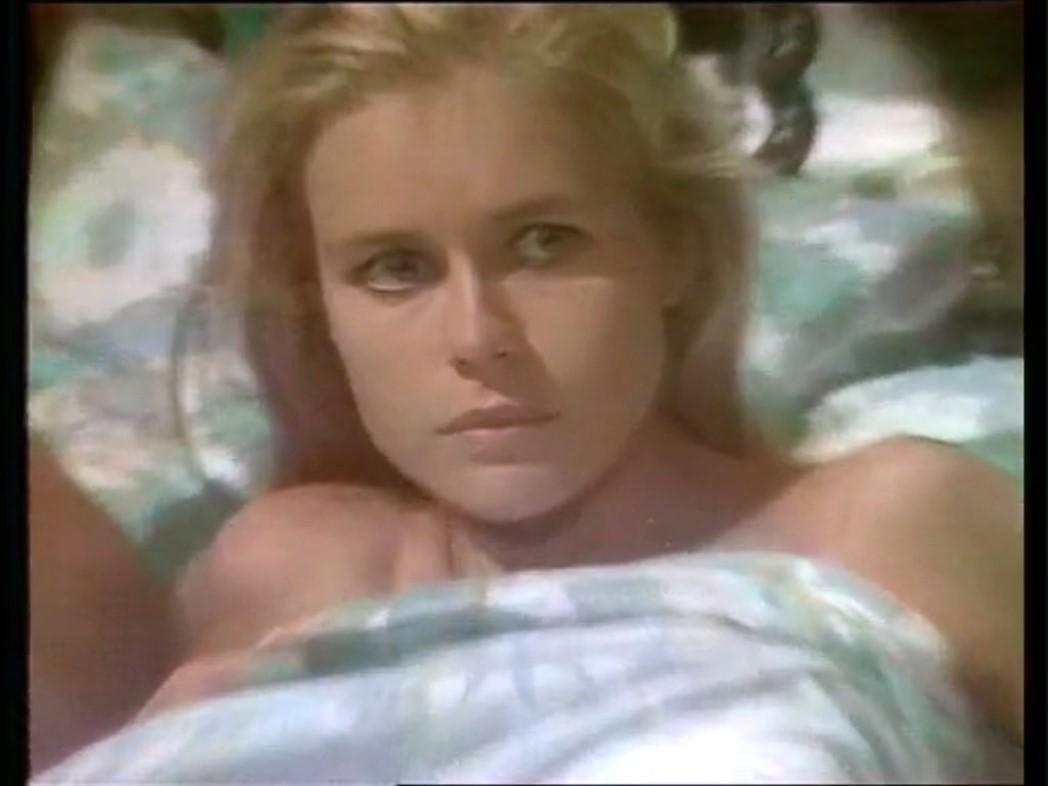 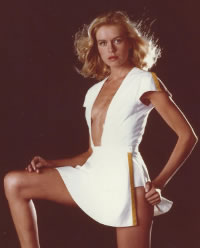 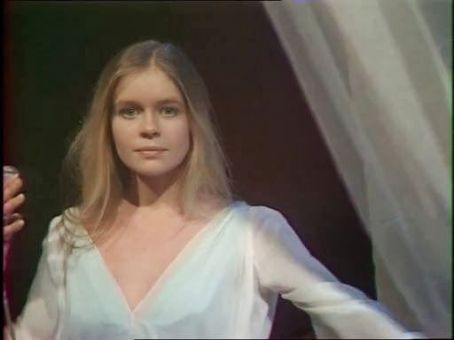 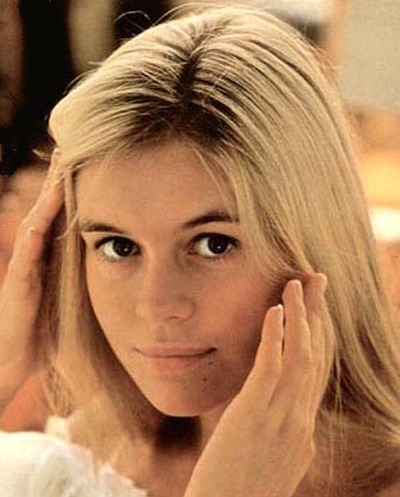 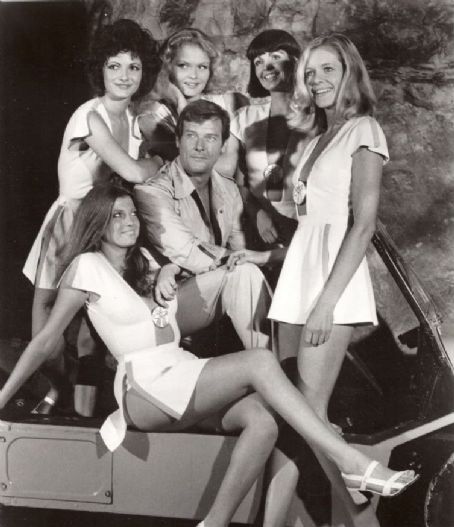 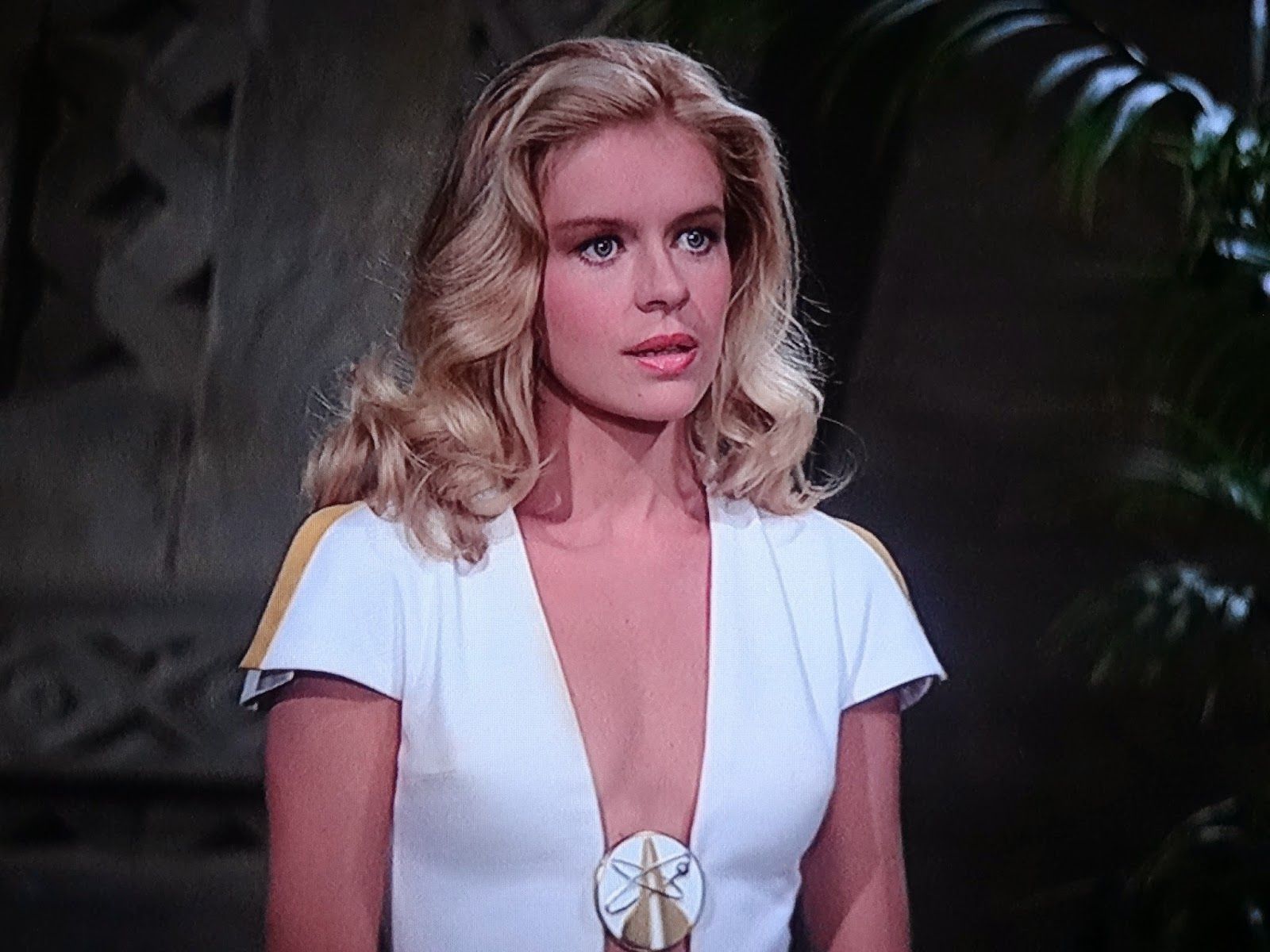 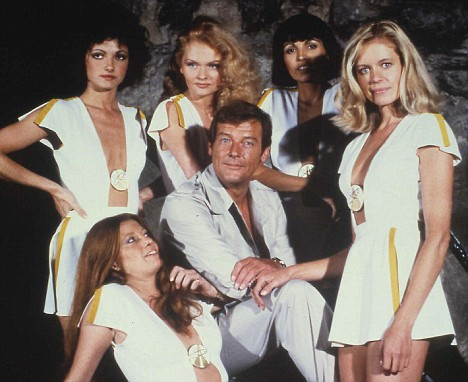 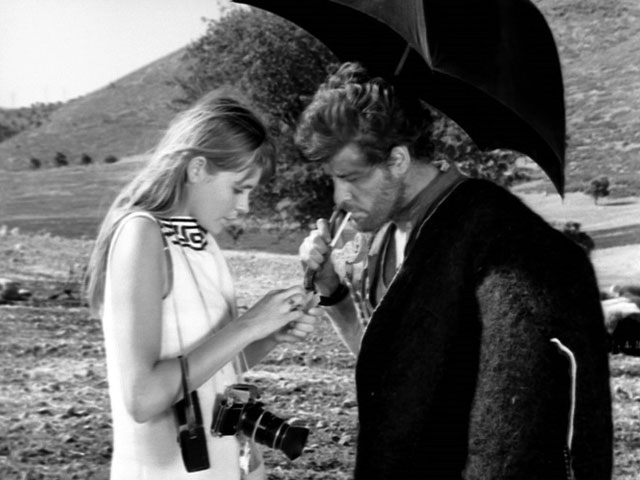 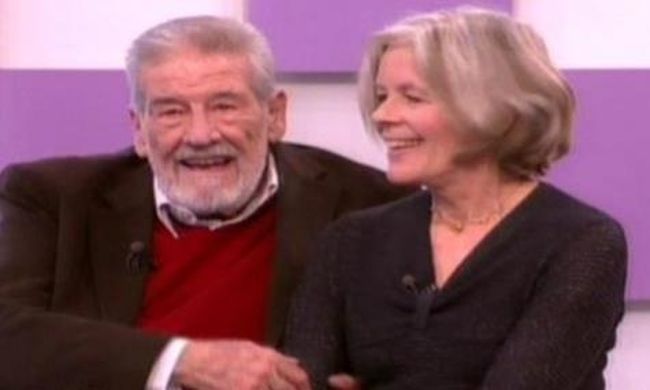 Anne Lonnberg has also made a singing career at the time she started acting, and released a few albums and songs where she sings in French English. 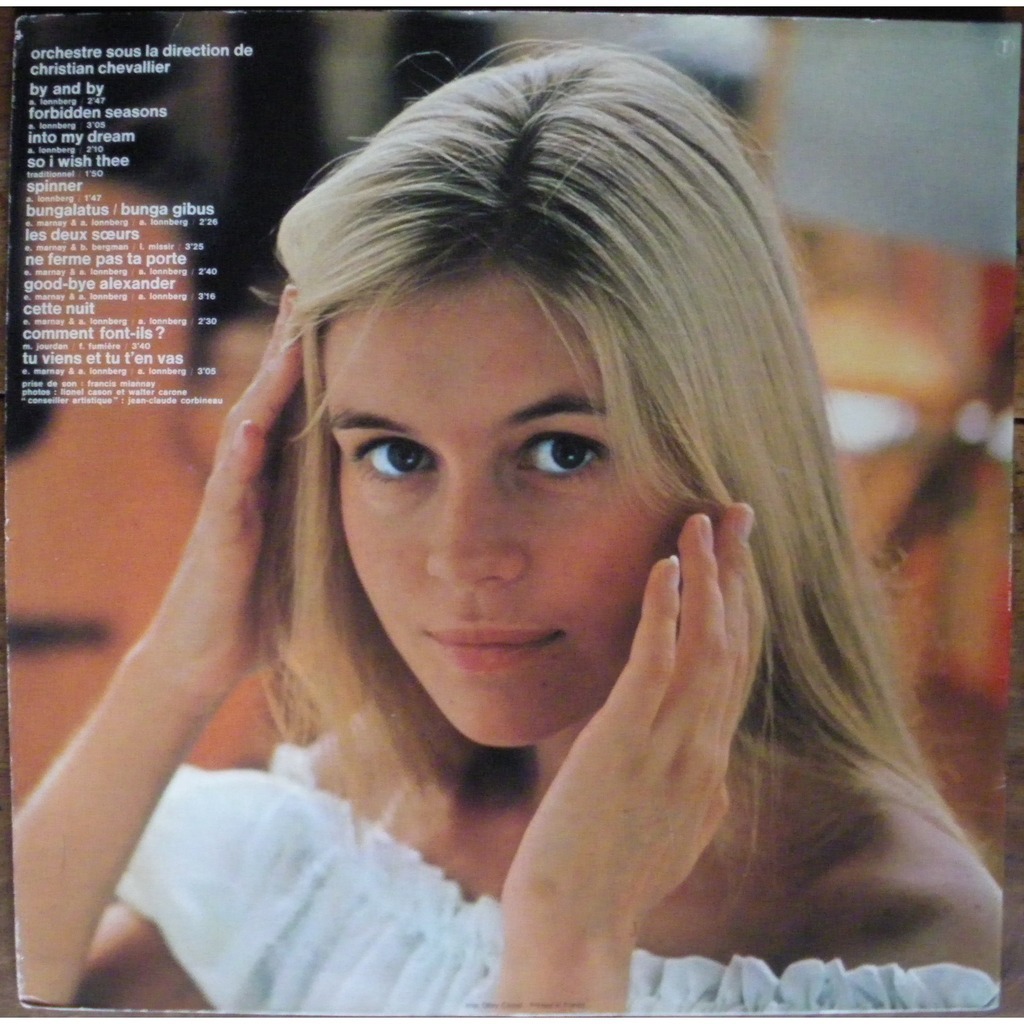 Thanks to Anne for sharing those two pictures !

Back to main site