First: Here's the Making of the location gallery..

This list contains: the episode, the title, number, season, location, and links so you can watch the series on Youtube. The quality is not the best, they were probably all recorded from VHS videotapes. I recommend to buy the new VHS dvd's. It's of so much better quality and a pleasure to watch and not expensive at all for 72 episodes. Season one is shot in Isere, Haute-Savoie, Auvergne, Bouches du Rhone, Provence

I remember I was so excited to visit Montmajour for the first time. I knew about the national holiday and looked at the online scedule. While arriving I may not go enter because there was an artist exposing for a few weeks. Most expositions does something with the environment and the environment with them, so that makes it very special and possitive, this one of 2013 was unfortunatelty not. A small; disappointements Montmajourt was closed. But I went back twice. I love to photographe, paint and read about the history of a place, breathing the culture. Stepping into those special places do make you feel you are entering another world. So much to see, so much to treasure, so much to realize. I visited many beautiful places in France, Crossbow- related. But entering a place I've seen 30 years back in thes series makes it more special because It's recognizable and there is a part you haven't see. The part that wasn't filmed, that makes you curious. Many European people go on holiday to France. When you are nearby and realize you are close to a location It worth visiting, feel the oldness and treat it with all respect so many people can visit it later after our visit and people keep enjoying it.

With a little help

Perhaps this is the part with the most work for us. Some locations were mentioned in the end-titles but too many were not. It was a pleasure to discover these hidden ancient treasures. But not easy at all! First I was offered help by S. Barthemely, he loves medieval stuff and plays in a French medieval group. And two years later I received all the help from also a French fan C. Petit. We really got the taste of it and we had a lot of fun discovering and tracing certain ancient features, but sometimeas frustrations too, especially when you've tried so hard and don't succeed. In that case I dare to ask Mr. Lyman.

In some case I carefully ask Mr. Lyman if he still knows after so many years. And yes. Never mind to look at it again, sometimes together with his wife and even the old card. Sometimes with results such as the old farm of Avignon. Thanks to him we found it otherwise never really. But he does not know all. You simply can not remember everything.

What I liked was; suddenly Dana Barron came with a photo from her photobook where the solution came for the Alchemist room. That was really cool. We think that this should be a real chapel. There was also so little visible, much covered with dark curtains. We were discussing ... were the windows gothic or still Roman or neo gothic? haha just fake!

When we found a difficult one that felt like we found a piece of gold. Sometimes hardly touched by the modern time so it felt felt you are thrown back in the ancient time and for me and some other fans; it's like we've discovered a place we have partly seen as a child. There is another part to discover. How does teh rest looks like? Those locations were selected by the creators of Crossbow for a reason; it has to be the it must connect with the right era and not have too many modern elements. Sometimes smuggling is done with cloths and images for a power cable or modern gutter, but it is often pure.

These places are not always known by the touristic sector or the main public. People who worked on Crossbow and many actors like Jeremy Clyde liked them. It was a real pleasure to compare this locations with our journey and to discover what was left out of the poicture of the camera angle. Comparing if things; are they still the same? Many places are protected monuments but some don't excist anymore, like the wall Stefan climbed practising before he climbe the tower (promised land),the forge in the same episode is taken down just about two years ago.  And in some cases the state of the building was too dangerous or you can't get in anymore. (like Boulbon the towerpart and Montmajour (is open but not the ruined monastery). Please take a look at the location galleries and you will understand.

Some locations became private property, in some cases I was invited to take a look, In some cases I entered because the door was open. In Chateau Faucher I   was close because of the holiday and couldn't get in contact with the owner. No pictures from the inside of Castle and church of Faucher. In some case people sent me pictures and then there is another thing: guided tours; like they do in Senanque, Senanque abbey was once inhabitat with monks, they left, also during the shootting of Crossbow but they came back the year after. Now you can partly see the building guided. It's no bad idea think of molest, stealing and graffiti. I have seen lots of Graffiti in the valley of Uzes (l'Eure valley, the mill building of the Ladyship episode). Not  nice site on these old beautiful stones.

What nice is to find traces like an old metal sign that pointed to a cave with FR3 on it. People who still live there and have also taken part in the recording or even participated. Also people who live there as a new resident and knew about my site. I let us

It also allows us to experience separate things like getting lost in the forest around the Bramonas, only we saw endless woods, beautiful branches of thick mosses and beautiful stone water places. The castle nearby had the largest volpture sitting there 5 meters from us on the castle wall, while looking at it they old came and we got in a chat, he also guides us to nice places. We received an invitation to come back from the official castle woman, whose castle for centuries in the family. She led us through the stables and the castle after closing time, made a nice chat and left us free to watch her beautiful garden and castle in complete freedom all evening. Such a wonderful sweet summer evening. We enjoyed so much. We also saw ruins that were so dangerous that we regretted being part of an example in Monthialoux. there is not much left of it, part of the bows and stairs are helas, collapsed; We saw that in some buildings of the beautiful village les ages. some are pearls and so nicely restored in style and some buildings there you hope that it will be okay. It's a shame to let such beautiful old houses go. Personally i have no good thoughts about Les Baux, a wonderful place really but we visited it three times because of it's beauty, the town, the view etc. Two times heavily rain, when we took the stairs to the top (a bit on the edge of the wall) we almost blown from the upper wall by the Fohn, the wind took our raincoats and I balanced on a stairstep. Then we looked at the clouds...kind of threatning bvut no signs yet of tunder...you see the clouds approching so well high up. Oke time to take the stair down...we just were off the stairs or an enormous thunderclap boomed througout the castle. pneumonia was also starting here. and the bended roads have often people driving on the wrong side of the way rapidly. Montmajour was closed the first time I visited, it must have been opebn. I checked but an artist was  exposing for weeks. To take a look around the corner made us run with two angrey digs behind us. I came back twice. Nice large monastery! My Prehistoric little animals living in the water of the carved graves. Oh the ancient farmhouse of Electors and Message from geneve was isolated and a scary place to be. Don't go there by yourself. Palais du Papes is ofcourse very populair but if you have bad luck your are quad up for hours. St Andre was a pleasure and no long times to get in.

"I saw some wonderful places in France, places up in the Pays des Volcans, which is the volcanic park up in the Auvergne. Places tourists don't go and ancient castles that people don't visit... We filmed at Annecy, which is near the Swiss border. The lakes there are beautiful.

There was one place that I’ve tried to track down since because it was so extraordinary. It was a place which had a full-on ancient Roman arch such as the arc-de-triomphe, except there was only half of it because the level of the ground had come up. There was a sort of playing field and then this extraordinary thing. I don't think it appears in the show, I think it was just used as a base. I would love to go back there because it was such an extraordinary sight. So if you ever track it down I'd love to know, seriously." 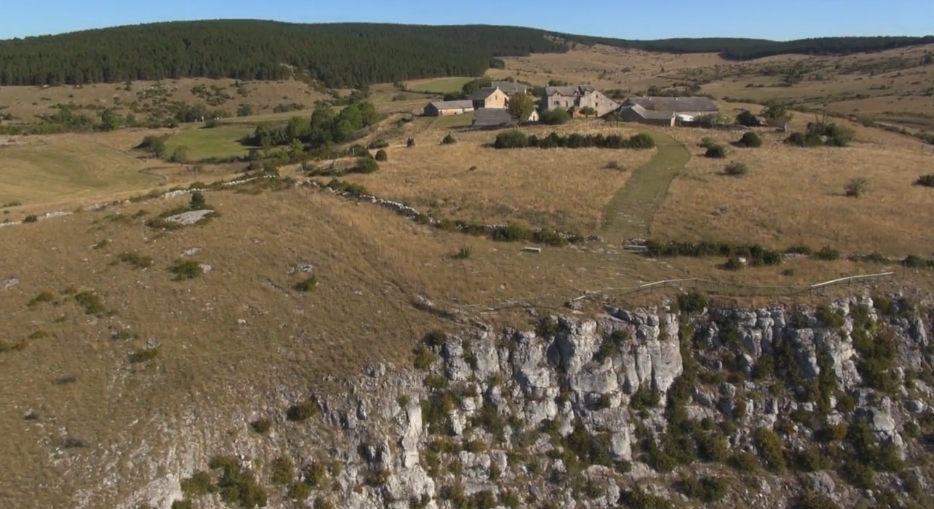